How to Get Here 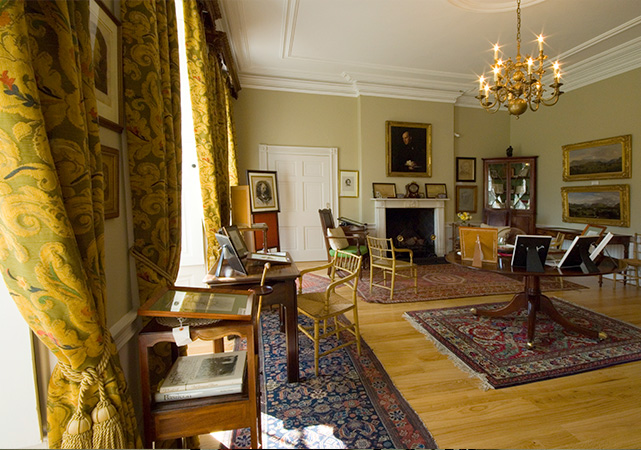 The personal and unique connections of James Spedding to Alfred, Lord Tennyson, Arthur Hallam and Edward FitzGerald are explored here. There is a drawing of Tennyson sitting in the Bee Garden potting shed "waiting for the rain to cease". Portraits of others of James’ friends and photographs by Juliet Margaret Cameron also abound.

Samuel Laurence's portrait of James Spedding (1808-81) presides over this room. James and his brothers were educated at Bury St Edmunds. There he became a friend of Edward FitzGerald. At Trinity College, Cambridge, he met Alfred Tennyson and Arthur Hallam, who were members of 'the Apostles'. After Cambridge, and a most successful spell at the Colonial Office, he devoted the remainder of his life to his study of Francis Bacon.

A man of outstanding modesty, he declined the permanent undersecretary ship of the Colonial Office, as well as the Regius Professorship of Modern History and honorary degrees at Cambridge. He was, however, glad to accept an Honorary Fellowship of Trinity College, Cambridge.

In 1832 James's younger brother Edward died, and Tennyson wrote in his memory his poem 'To JS', the first of his great elegies. The opening lines make a tribute to James's quiet composure:

The wind, that beats the mountain, blows
More softly round the open wold,
And gently comes the world to those
That are cast in gentle mould.

Tennyson had already dedicated his poem 'Dear Friend' to James in 1831. The two were always close, with James spending much time discussing Alfred's draft poems. James reviewed the 1842 Poems in the Edinburgh Review.

In the Drawing Room are portraits of Tennyson and Arthur Hallam, the outstanding member of the Cambridge Apostles who by 1833 was engaged to Tennyson's sister Emily. Hallam's death in that year was a terrible blow to Tennyson and inspired 'In Memoriam'.

In 1835, still grieving for his friend and short of money, Tennyson sold his Chancellor's Gold Medal for English Verse for £15 so that he could afford to travel to Mirehouse. There he met Edward FitzGerald, and a lifelong friendship followed. At Mirehouse, Tennyson worked on Morte d'Arthur', 'The Daydream', 'The Lord of Burleigh' and 'The Gardener's Daughter'. 'Fitz', later to gain fame with his translation of the Rubaiyat of Omar Khayyam, enjoyed a more lethargic holiday.

The portraits, letters and drawings, as well as early photographs by Julia Margaret Cameron, tell the story of the friendship of James with the Tennysons, FitzGerald, Hallam, Thackeray and other literary figures of the period. Tennyson returned to Mirehouse with his wife (Emily Selwood) in 1850 during their honeymoon